Mobile apps galloping in the Year of the Horse

VietNamNet Bridge – The Vietnamese market is big, while Vietnamese engineers are talented, but Vietnam still does not have enough necessary conditions to develop the mobile app industry. 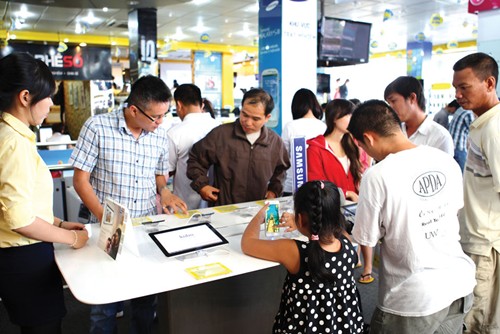 Though Flappy Bird has been taken down from app stores, it remains the hot topic for discussion on technology forums. With 50 million downloads, Flappy Bird has helped improve Vietnam’s position in the world’s mobile application map.
However, the success of Flappy Bird does not mean the strong development of the Vietnam’s mobile app industry.
According to VNISA, the Vietnam Information Security Association, most of the online games available in the Vietnamese market are the imports.
If noting that only one mobile game is developed domestically, while 40 other games are imported from other countries, one can see that Vietnamese firms do not intend to develop games themselves. They only plan to import games to distribute in the domestic market, an easy thing which allows them avoid business risks.
A report of Nokia Store showed that Vietnam is one of its 10 markets which have the highest number of downloads. However, of the 177 content developers who have products with more than one million downloads available on Nokia Store, there are only four Vietnamese, namely Naiscorp, VNG, Colorbox and BlueSea.
According to Le Hong Minh, CEO of VNG, the domestically made games just made up 10-15 percent of the total turnover of VND6 trillion from the game market in 2012.
It is questionable that Vietnamese labor force in the game industry, which is believed to be most capable in the region, can only create such a modest revenue.
However, Minh and his colleagues still keep optimistic about the future of the mobile app industry.
Flappy Bird’s success has pointed out that the mobile game and app developers in Vietnam can follow a new way, suitable to small groups of developers who don’t have to have too complicated IT systems, but only need to use web services on the base of cloud computing.
In fact, the domestic market recently has welcomed a lot of domestic mobile app products, from the dictionary, vocabulary learning, personal spending management, calendar, pocket calculator to social networks such as Zalo Chat, Tapme or Ubox.
Together with the strong development of the mobile market, the mobile app market has also been growing rapidly with the establishment of a series of app stores such as Appstore.vn, Vimarket, Mstore, Qstore, Clever Store.
Reports showed that Vietnam has listed itself among the countries with the highest growth rates of iOS and Android-based devices. With the growth rate of 266 percent, it is just second to Columbia.
ABI Research has predicted that the global total turnover from mobile apps would reach $46 billion by 2016, an increase of $8.5 billion from 2011. The Vietnamese app market would also witness a strong robust supported by the existence of 10 million smart phones and 20 million 3G subscribers.
In 2013, Nokia Vietnam put its mobile phone factory in the Vietnam-Singapore Industrial Park in Bac NInh province into operation, laying a foundation for the mobile phone manufacturer to return to Vietnam with new business strategies targeting Windows Phone management system and apps market.
DNSG
(Vietnamnet)
tag: kng.vn,  IT Outsourcing, Mobile application, Web application , Offshore, Vietnam, France, iphone ipad android developer  application development,  dedicated  team
Posted by thienhuong at 10:21 AM No comments: