VietNamNet Bridge – The main source of income for mobile network operators in the future will be from 3G instead of voice and text services. 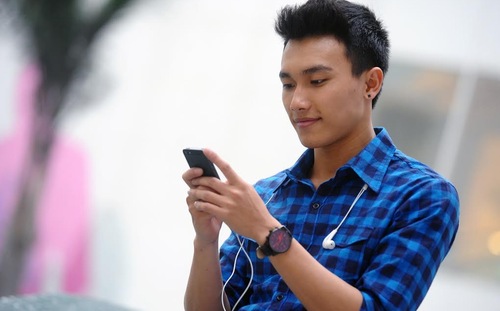 The proportion of total revenue from 3G services has been increasing sharply, though the service still has not become the main source of mobile network operators’ income.
A recent survey found that people use smartphones mostly to access the internet instead of making calls or sending messages.
The discovery, analysts said, shows that mobile network operators should make more investments in 3G instead of voice or text services.
Nielsen’s survey conducted in 2013 found that the percentage of internet users in Vietnam is high compared to the rest of the region.
Of the 58 percent of Vietnamese who regularly use the internet, 97 percent spend 16 hours a week on the internet. There is a considerable proportion of people who are always “online”, either on smartphones or computers.
The report of a mobile network operator on the habits of mobile phone subscribers showed they access the internet seven out of every 10 times they use their smartphones. Only three times are spent to make calls or messages.
The big changes in the telecommunication market, plus the low-cost smartphone boom in Vietnam, will lead to a sharp growth of 3G services in the upcoming years and the decrease of 2G services, analysts said.
Low-cost smartphones are priced at around $40.
Mobile network operators are ready to adapt to new circumstances. In the past, mobile phone subscribers had to register to use 3G services and pay VND10,000 a month to maintain services. But now they do not have to register or pay the fee.
A senior executive of VinaPhone, one of the three largest telecom networks in Vietnam, said that 3G is integrated in every sim card launched in the market. This means that users can automatically use 3G services, and there is no need to register with the operator.
The Ministry of Information and Communication (MIC), in its latest report, also noted that 3G has become a basic service like calls and messages.
Nguyen Dinh Chien, deputy general director of MobiFone, said he expects revenue from 3G services to increase by 60 percent this year.
VinaPhone and Viettel, two of the three biggest mobile network operators, have also confirmed that they expect the same or higher growth rates in 2014.
An experienced telecom expert said that in the US, UK and France, services are provided in packages, which allow clients to make calls and send messages for free if they use 3G.
“I believe this is the way Vietnamese mobile network operators will follow in the future,” he said.
“Once clients use smartphones mostly to access the internet, mobile network operators will have to be ready to meet the demand, not just focus on voice and text services anymore. It’s inevitable,” he added.
Chi Mai/vietnamnet
tag: kng.vn,  IT Outsourcing, Mobile application, Web application , Offshore, Vietnam, France, iphone ipad android developer  application development,  dedicated  team
Posted by thienhuong at 9:30 AM 1 comment: